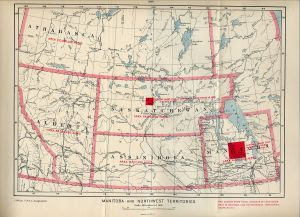 Manitoba and the North West Territories in 1900

Genealogical research centers around discovering ancestral lines by delving into research focusing on the ancestral family name, the time period, momentous occasions, birth and death dates and thirdly the location where the family lived. These three, name, date and place names can help to draw a picture of the history of the family. From the place names, the education and occupation can be sought after. The region also will uncover documents such as newspaper obituaries, birth, christening and marriage announcements, wills, land patent titles and scrip to name just a few. Census enumerators canvassed the population by region as well, so if an historical census is released for online viewing which covers the time period of the ancestral family, it can be perused by region. Neighbouring family members can be ascertained from the census along with occupation and residence.

The province's boundaries are:

1. The 4th Meridian of the Dominion Land Survey or 110°W longitude at the western demarkation between the province of Alberta and Saskatchewan.

4. The eastern boundary does not lie upon the 2nd Meridian, but is rather east of the 102nd meridian west (the 2nd Meridian of the Dominion Land Survey) thus forming the division between the province of Manitoba and Saskatchewan.

Some confusion has arisen regarding historical and current place names. For example if one possesses historical letters which may provide an address say of Cannington Manor, Assa, NWT. Assa was a common abbreviation for the provisional district of Assiniboia in the North-West Territories (1882-1905). (The hyphen in North-west Territories was removed in 1906 becoming Northwest Territories) The District of Assiniboia is described as the 33rd township (about 51.97 degrees north) southward to the U.S.A.- Canada border. The eastern border of Assiniboia abutted the western boundary of the province of Manitoba which was between 101 and 102 line of longitude. Assiniboia's western border likewise extended past the fourth meridian, the current westerly provincial border to meet with the provisional district of Alberta. The provisional district of Assiniboia extended westward to the further than the fourth meridian to about 112 °W meridian longitude between about range 10 and 11, past the fourth meridian (110°W longitude).

For example, historical maps show Medicine Hat section 31, township 12, range 5, west of the fourth meridian as being within the boundaries of the District of Assiniboia, NWT. Medicine Hat is within the province of Alberta boundaries after 1905.

Likewise, Brandon located at section 23, township 10, range 19 west of the prime meridian or latitude longitude 49º 50' 49'' N, 99º 57' 8'' W was outside of the boundaries of the original :postage stamp" province of Manitoba which had a western boundary at the 99th line of longitude. However, Brandon was not within the boundaries of Assiniboia, NWT whose eastern boundary was between the 101 and 102 line of longitude. Currently Brandon is within the province of Manitoba.

Fort Pelly and Fort Ellice were both close to the Provisional District of Assiniboia - Province of Manitoba boundary. Fort Ellice within Manitoba, and Fort Pelly within the Provisional District of Assiniboia. It is interesting to note that Fort Livingstone, headquarters for the North-West Mounted Police was the first capital of the North-West Territories 1876-1877. Fort Pelly is the closest settlement to Fort Livingstone. The current village of Fort Pelly is close to the Hudson Bay Company post of Fort Pelly existing between 1824-1912.

The provisional district of Assiniboia in the North-west Territories can be seen to encompass a sizeable district, quite distinct from the current place name of Assiniboia which is a town in the province of Saskatchewan located at section 10 township 8 range 30 west of the 2nd meridian or latitude, longitude 49º 37' 45'' N, 105º 59' 19'' W.*

Within the provisional district of Athabasca was a post office located at north west section 20, township 66, range 22, west of the 4 meridian which opened in 1901 under the name of Athabaska Landing, changing names in 1914 to Athabaska, and again seeing a name change in 1950 to Athabasca. Athsbasca is currently located within the province of Alberta boundaries.

The settlement of Saskatoon (which changed names to Nutana in 1902) was located at section 28 township 36 range 5 west of the third meridian and is usually shown on maps as being within the Provisional District of Saskatchewan, NWT. Nutana, Riversdale and West Saskatoon (change of names in 1902 to Saskatoon) were three villages which amalgamated to form the city of Saskatoon in 1903 latitude longitude 52º 8' 23'' N, 106º 41' 10'' W.

Saskatchewan is commonly abbreviated Sask, and Saskatoon may sometimes be seen as S'toon. The current abbreviation for the province of Saskatchewan adopted by Postal Canada is SK.

By watching the dates of historic documents, it is easier to ascertain correctly the placenames of Saskatchewan ancestors. Oral history may recollect that an ancestor lived in a certain district, which may indeed refer to one of the three provisional districts, Assiniboia, Saskatchewan or Athabasca or it may refer to a One Room Schoolhouse District. Canada became a nation in 1867. Saskatchewan didn't become a province of Canada until 1905, before this it was a part of the NorthWest Territories (1868-1905). The Rupert's Land Act 1868 was an Act of the Parliament of the United Kingdom of Great Britain and Ireland, authorized the transfer of Rupert's Land from the control of the Hudson's Bay Company to the Dominion of Canada. The North West Territories was divided into districts in 1870. The British (in 1670) had given Rupert's Land to the Hudson Bay Company which gave the company dominion over lands where there was water passageway from the Hudson Bay.

Comprehensive Atlas of Canada and the World. George Philip. London. 1985.

The First Boundary Extension The Association of Manitoba Land Surveyors Date accessed May 26, 2014