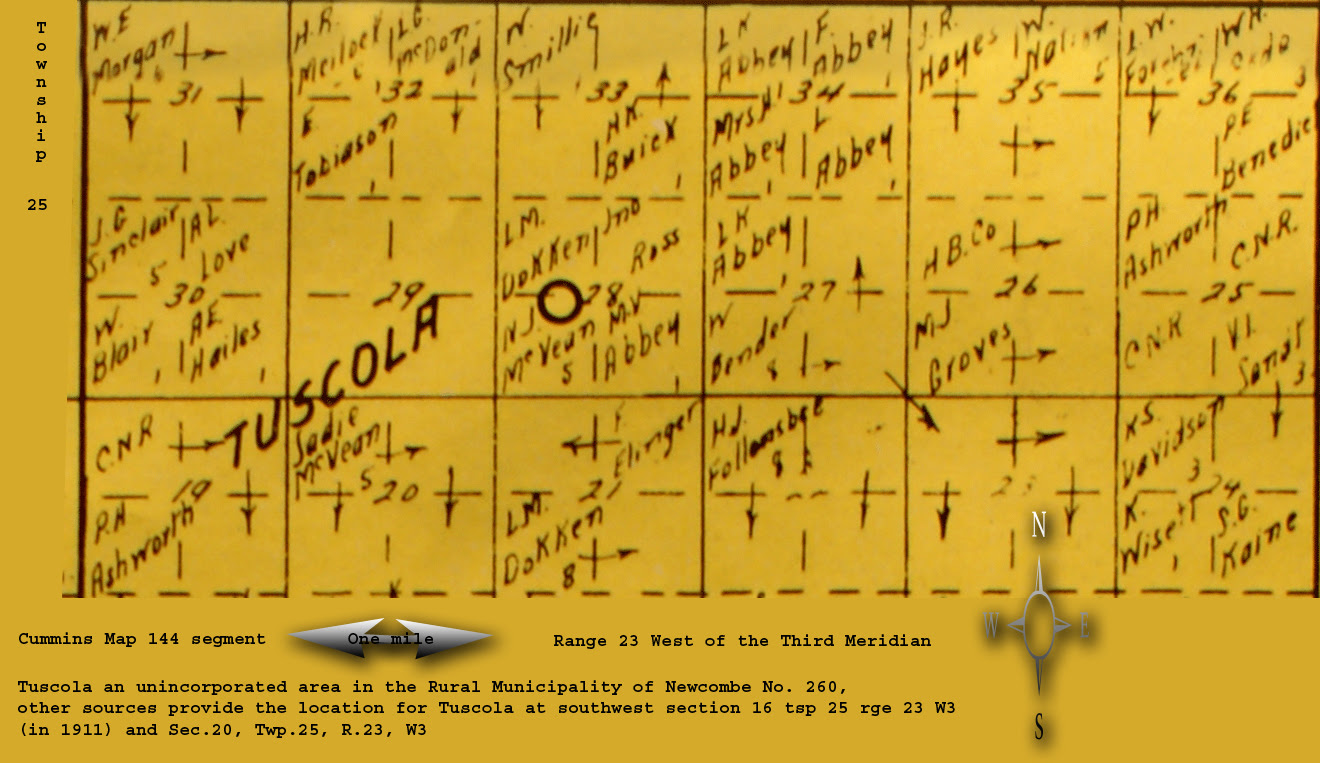 This is an examination of the "Place of Habitation" on the Canadian 1921 Census in regards to the agricultural lands of the prairie provinces to better meet the needs of genealogists and other researchers who will make use of information and data from the Canadian 1921 census. It is erroneous to use the census enumeration district or sub-district name as a place of residence, as it would be incorrect to use the rural municipality name as an ancestor's address. A rural municipality does not correspond to a city, town, village or hamlet.

For a place of residence, early farming residents would provide the nearest Post Office to their homestead location as their address as is often seen on the World War I Canadian Expeditionary Force application files. As towns, villages and cities became established, post office became established in these urban centers, and there was a departure from the rural postmaster operating a post office in their residence. In correspondence, a rural land owner may say they live in a certain "district", which usually would refer to the school district in which their farm was located and where the family children attended the one room schoolhouse.

When referring to the 1921 census it is important to distinguish between the terms used on the census enumeration form. The first few columns refer to column 1) number of dwelling in order of visitation by the census enumerator, column 2) number of family, household, or institution in order of visitation column 3) name of each person whose place of abode was in the household. The next set of columns refer to place of habitation. For rural dwellers with agricultural holdings, this location was usually referred to with the legal land description with columns allocating the section, township, range and meridian. The next column was entitled "Municipality".

For rural residents, this "Municipality" column holds the name of the "Rural Municipality". For an example; referring to the original document District 217, Sub district 11 in the province of Saskatchewan Page 5 It cannot be said that the city, town nor village is named King George. Looking at the 1924 Rand McNally Map (or another historical map) for the area of the first entry on page 5 of the census mentioned above, a John Smith, who is the head of the household residing at section 13 township 26 range 12 west of the third meridian - Municipality King George.

It is easily determined by using the township and range nomenclature that the cities, towns and villages which are near to township 26, range 12 west of the third meridian are Mosten, Steeledale, and Wiseton which happens to be on the Canadian National Railway line. In this case, the municipality does indeed refer to the King George Rural Municipality Number 256. Unless it is a specific rural municipality map, rural municipality names are not mentioned on provincial highway or historic railway maps. If a larger area is shown for example on an atlas map, it usually refers to an electoral district, either provincial or federal depending on the atlas and its key.

Placing the legal land location for the John Smith residence, section 13 township 26 range 12 west of the third meridian, into the Prairie locator one obtains the GPS conversion. The resulting GPS location, in this case, is 51.2198, -107.5509 which would locate the section which is an area of one mile by one mile. Now this GPS location is approximate for the actual farm land holdings, as some farmers did own an entire section of land, but pioneer homesteaders usually started out on a quarter section of land, which would be one half mile by one half mile in size, and usually referred to as either the south west, south east, north west or north east quarter of the section [see diagram]. There are on the internet a number of listings for the western land grants which were issued to prospective homesteaders to narrow down the quarter section of residence.

Now then, incorporating these GPS coordinates into the Canadian Geographical Names Data Base (CGNDB) by coordinates (latitude/longitude) reveals that the following towns, villages and cities are within a twenty kilometer (12 mile) radius from the aforementioned GPS location.

Anerley is a nearby Unincorporated area 23 kilometers - 14 miles away.

Dinsmore is a nearby Village 14 kilometers - 9 miles away.

Forgan is a nearby Unincorporated area 18 kilometers - 11 miles away.

Glamis is a nearby Unincorporated area 27 kilometers - 17 miles away.

King George No. 256 is a nearby Rural Municipality

Leach Siding is a nearby Unincorporated area 11 kilometers - 7 miles away.

Steeledale is a nearby Unincorporated area 5 kilometers - 3 miles away.

Wiseton is a nearby Village 12 kilometers - 8 miles away.

Another source of locations would be the book, Geographic Names of Saskatchewan, written by Bill Barry, or the Library and Archives Canada Post offices listing which is online. The Post Offices and Postmasters Library and Archives Canada location result for Mosten - the closest placename to the John Smith 1921 census "place of habitation" is Section 6, township 27, range 11 west of the third meridian. The postal listing also lets us know that Mosten operated a post office between 1908 and 1941 under W.J. Stewart and Mrs. Eva Stewart (postmasters).

When transportation was mainly done by walking or horse and buggy, settlements with stores, elevators and other amenities were located much closer together. It was quite common that homesteaders would walk from their farm into town for meetings or grocery supplies, and walk the distance of seventeen miles (27 kilometers) back home again. When the population relied upon automotive transport after the second World War, and highways were straightened and paved, the main urban centres grew exponentially, and the smaller towns, villages and rural areas began to see a shift of their population to the cities.

Besides towns and villages which have disappeared since the early 1900s as mentioned earlier, rural municipality names and boundaries have also changed. The listing which follows provides a few of the name changes and mergers which have occurred historically in the province of Saskatchewan. The listing is not complete, as new updates regarding regional mergers and amalgamations come to light, they will be added.


Some of the Rural Municipality mergers and name changes:

In summary, the census do provide the place of habitation for ancestral research, corresponding with ancestral name and date. Realising the place of habitation correctly eliminates discrepancies and errors in future research. For example recording an ancestral address as "Kindersley" from the "Municipality" column, the researcher needs to take due care and diligence to determine whether it is meant the rural municipality of Kindersley No. 290 which has the communities of Brock, Flaxcombe, Kindersley and Netherhill within its perimeter, or if it is the town of Kindersley. The difference between allocating the address to the town of Kindersley or the rural municipality of Kindersley No. 290, for example, may mean the difference in locating or becoming lost in the search for the cemetery records or exploring a family biography or running into a brick wall when trying to delve into a local history / family biography book.

As an example, Delbert Acker has a place of habitation on fourth avenue in the town of Kindersley on page 14 Census enumeration district name Kindersley District Number: 217 Sub-District Number: 65 City, Town or Village: Town of Kindersley. Whereas on page 10 of Census District Name: Kindersley District Number: 217 Sub-District Number: 38 City, Town or Village: RM Kindersley records Angus Fletcher, a farmer, on section 6 township 30 range 22 west of the third meridian, municipality "Kin". The placenames closest to 6 tsp 30 rge 22 W3 are Beadle, Viewfair, Kindersley and Netherhill. Online are a few listings of current rural municipality names in use now on wikipedia, Saskatchewan Genealogy Society cemetery index, the Saskatchewan Government's Municipal Directory System or the Canada Gen Web's Cemetery project listing. From these it can be seen that in all liklihood, the municipality listed as "Kin" above was an enumerator's abbreviation for Kindersley when recording (in the case of these agricultural lands with sections, township and ranges, that the abbreviation "Kin" means the Rural Municipality of Kindersley No. 290. The abbreviation for "Kin" meaning the Rural Municipality of Kindersley No. 290 can also be confirmed by scrolling to the very top of the page to see that the enumeration sub-district No. 217 is located in R.M. Kindersley.

The overlap of placenames between census district name, placename [city, town, village or hamlet], and rural municipality may indeed be the same name, however each describes a totally different region. A census district name is allocated by the Department of Statistics, Government of Canada. The rural municipality is a rural civic administration district in the agricultural region of the prairie provinces, usually eighteen miles by eighteen miles in area with independently governed cities, towns, villages and hamlets within its perimeter. Please record the "Place of Habitation" information correctly in your genealogical or historical research so that yourself and others can follow the data flow, continue in their research endeavours with fewer brick walls, and many more successes.


Another note on abbreviations:
Using John Smith's legal land location from above:
section 13 township 26 range 12 west of the third meridian this full nomenclature can be abbreviated as follows:

Reflections of the Past. History of Parkside and the Districts of Bygland, Cameo, Hilldrop, Honeywood, Ordale and Spruce Glen. page 260. Compiled and published by Parkside and District History Book Committee. c1991.

Many of the sources for this article are embedded in the text.

Some of the sources regarding amalgamations and boundary changes came from email correspondences directly with the current Rural Municipalities as indicated.