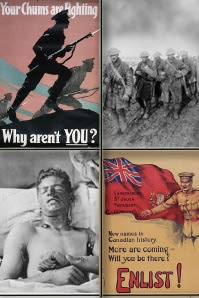 In time for the 100th anniversary of World War One (1914-1918), millions of images from historical newspapers are being digitized to share online. The newspapers hail from hundreds of communities across Saskatchewan, Canada.

Answering a need from communities to have access to archival newspapers, Saskhistoryonline.ca has embarked on a project to digitize historical newspapers starting with the war years. The project was announced via a CBC Radio interview, on May 26, 2014.

For further information follow Sask History on twitter or on facebook. Saskatchewan History Online also uses the social networking of history Pin where you can discover more of the images the project has assembled together about the rich and diverse history of the province. Learn about Saskatchewan history online which is supported by the Saskatchewan Ministry of Education and the University of Saskatchewan University Library. Galleries, libraries, archives, and museums are assisted in digitizing their collections by the Saskatchewan History Online technical infrastructure which are then documented on the What's new pages of the website.

Saskatchewan History Online is a dynamic, and committed organisation dedicated to preserving the heritage left by the many early residents in the province of Saskatchewan. Each and every image left an imprint on the community which preserved the heritage in galleries, libraries, archives, and museums. Current residents are truly indebted to Saskatchewan History Online which has now initiated many projects who document the courage of our ancestral forefathers. By the digitization process and easy access to these records it is hoped that future generations will indeed appreciate the many efforts made by their predecessors.

Canada was committed to the war effort on August 4, 1914. Within two months, the Canadian Expeditionary Force had recruited 33,000 who departed for service overseas on October 3. The digitized collection will not be up and running by August of 2014, but organizers are hoping to have the website available for November 11, 2014, Remembrance Day.

As a great tribute to preserving the information from archival newspapers, the digitization process brings history to life. These newspapers reveal information about the war era, however head lines did not exclusively focus on the Great War. Local news, occasions and events also made headlines during these years.

Chronicling the war years through Saskatchewan historic newspapers will be a treasure trove of data, and a true preservation repository which honours the commitment of Saskatchewan residents during the Great War. The finished web pages will indeed showcase the culture, opinions, hopes and fears of the fledgling province, as told by her gallant reporters.

"Along came nineteen fourteen and our nation then appealed
For men to fight on Vimy Ridge and go to Flander's Field.

They were gunners, fought in horse brigades, and in the infantry
they served their country well and they brought back the victory.

Canada and the First World War Library and Archives on Flickr. Date accessed May 26, 2014.

Library and Archives Canada images on Flickr. Set of images: Canada and the First World War.