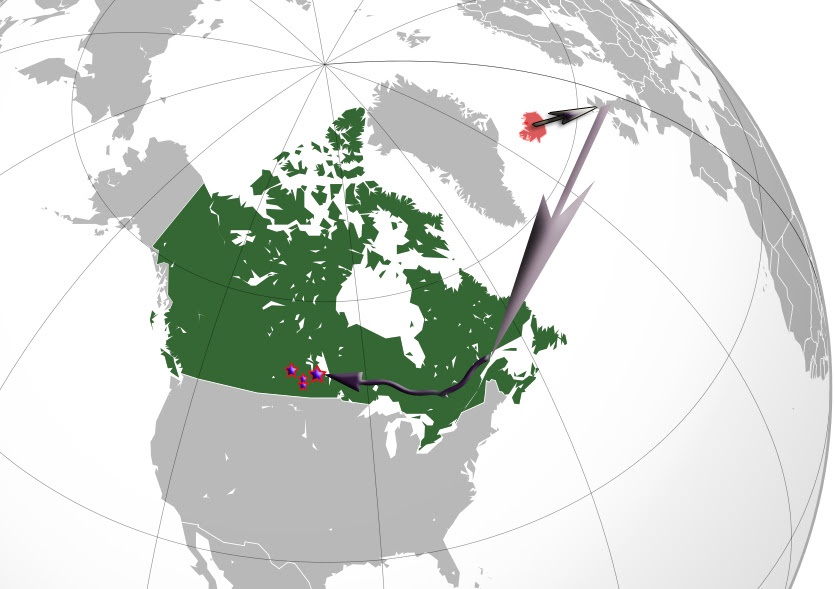 Adapted from by Wikimedia commons File:Canada (orthographic projection).svg CC-BY-3.0 by Aquarius.geomar.de
.....From their homes in Iceland, via ferry to Scotland, then by way of steamer across the vast Pacific Ocean reaching the prairies by rail, such was the path taken by the Western Icelanders who established themselves in New Iceland along the shores of the great Manitoba lakes in 1875. Six years later, the settlement expanded into the North West Territories establishing Thingvalla and Logberg. This area expanded to the south, creating Vesturbyggd or or the "Western Settlement" also called the Concordia district (near Churchbridge). Around 1887, Vatnsdalur the "Water Valley" District around Vallar and Hólar (now known as Tantallon) received Icelandic migrants. Five years later Icelanders also made homes around the Quill Lakes, Fishing Lake and Foam Lake which became known as Vatnabyyður or Vatnabyggd "Lakes Settlement." During this early settlement era, these ethnic bloc settlements were part of the District of Assiniboia, North West Territories. It wasn't until 1905 that the province of Saskatchewan was incorporated in Canada.

....."Rocked in their infant days to the tunes of the old sagas, Canada's Icelanders have provided names for commemoration in the sagas yet to be written in the persons of such historic figures as Vilhjalmur Stefansson, Minister of public works in the Norris Administration; Wilhelm Paulson, Member of the Legislative Assembly (MLA); Bryan Bjarnason, MLA; Bill Sveinson, MLA; Raymond Thorsteinsson, geologist; Stephan G. Stephansson, poet; Rev. Jon Bjarnason, Founder of the Icelandic Lutheran Synod of North America and many famous office holders."1 such as Leo Kristjanson, Ph.D. president of the University of Saskatchewan (U of S) 1980-1989, Laurel Johannesson, artist; (Hans) Jakob Jónsson, Lutheran Minister, and Thorbergur Thorvaldson M.Sc., PhD. head of the U of S Department of Chemistry. "To maintain their common ideals an association was formed in 1919 known as the Icelandic National League of North America embracing both sides of the line on the same principals as the Sons of England and Caledonian Society."1

.....According to Joan Eyolfson Cadham, "the Icelandic Eddas, prose and poetry were preserved orally until they were written down during the 13th century.... Gudmundur Andri Thorsson, an Icelandic author columnist and editor, explained that, in Icelandic, 'the old meaning of the word edda is langamma - great grandmother ..somewhere deep inside we hear the voices of our great-grandmothers - our Eddas - who knew all the stories and sometimes drew us into the strange and beautiful world of storytelling.' "2 These tales tell of the "ancient Icelandic strength, courage and determination that defied everything, even the elements and death itself.6


.....The Icelanders came to Canada in family groups mainly organized by their own personal initiative following the advice of friends, relatives or immigration agents who had traveled to the new country before them. Truly, the ethnic network of Saskatchewan has been truly enriched by this infusion of Icelandic roots and culture.