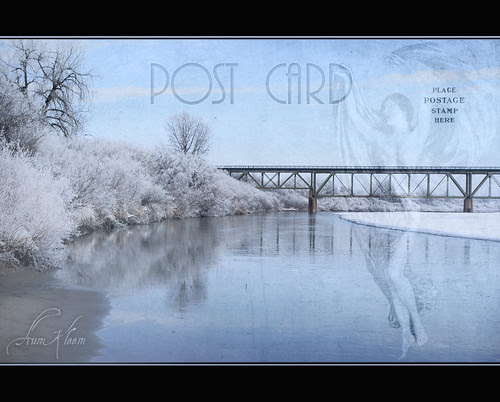 Now again 'tis lovely May, by the riverside I stray,
And the song birds sing around and overhead,
And I watch the river flow as I did long years ago
When the North West in her glory sailed ahead.

As I watch the river flow, I think on the long ago
When each pioneer granted a homestead begun
In the land so bright and new, in the land so fair to view
In the valley of the famous River Saskatchewan.

Then the North West in her prime, on the river made good time
And her passengers admired her as she sped
Through the valley bright and new, through the valley fair to view
On the swift waters of the Saskatchewan water bed.

Fancy hears the tinkle ting of her bells as they would ring
For to start or stop or back or come ahead,
And the sounding of her gong, as they steamed her extra strong
Through the Saskatchewan river water bed.

And now it comes to mind, how each woodpile they would find
And load up enough to keep her furnace fed
As she sailed from side to side down or up the ruby tide
Landing pioneers along the Saskatchewan water bed.

Men of fame and high renown, on the North West then sailed down
To find out its great resources they were led
That they might see and write, of the fertile vale so bright,
Lovely valley, flowery valley, Saskatchewan's water bed.

Now to you I will relate, Peter McArthur's ecstatic state
Honeymoon suites, Grand piano, nothing but the best
Pioneer Iron Works of Wisconsin, double-level engines placed within,
Nothing repressed, the envy of the west.

But the North West is no more, for upon Edmonton's shore
She was wrecked upon Low Level Bridge, and never more can come ahead.
But some relics of her still lie beneath the waves a'murmurin' still
In the willows by the Saskatchewan River bed.

She will never sail again, for the bridge did cut her in twain,
And no more upon her decks can old friends have fun
As they danced in days of yore, as she sailed from shore to shore,
Landing pioneers along the shores of the Saskatchewan.

I recall to mind today, some old friends who went away,
Pioneers who were to finish what they had begun,
Friends who came here to reside, when the North West in her pride
Towed her barges filled with grain upon Saskatchewan

Friends are leaving one by one, pioneers have gone,
Some have gone to other lands and some are done,
Some of them are laid to rest, in the East, North, South and West,
And some others rest beside the peaceful Saskatchewan.

Then, good-bye old friends, good-bye, for the dear old days we sigh,
And live o'er again some youthful years long gone,
And we'll often call to mind, happy days we left behind
In the valley of the famous River Saskatchewan.

As I muse and watch the stream, here and there a fish doth gleam,
And the song birds overhead dig and sing 'neath the springtime sun,
And I watch the river flow, as I did long years ago,
When the North West in her glory sailed the Saskatchewan.

Adapted from A Ballad of the Red by Patrick H. Donohue, an old riverman

Steamships All Aboard! on the Saskatchewan

Navigation of the Saskatchewan. Steamers


Ballad of the Saskatchewan ~ A Poem


The Aged Pilot Man ~ A Poem


Table of Steamships upon the Saskatchewan